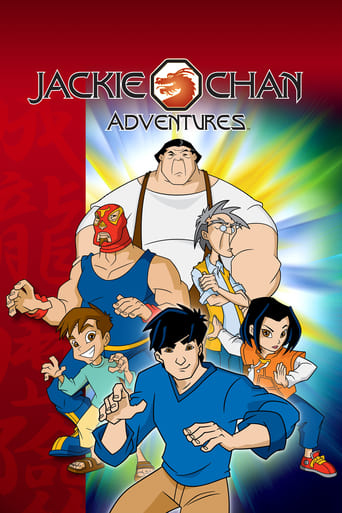 "Jackie Chan Adventures" is the exciting new animated series from world-famous action hero Jackie Chan. You've never seen Jackie like this! Archeologist Jackie Chan's 11-year-old niece Jade proves action runs in the family when she arrives from Hong Kong to live with Jackie and his wise, old uncle in San Francisco. Meanwhile, Jackie has found an ancient Chinese talisman, and now he's got government agents and gangsters chasing after him. Soon, Jackie and Jade learn the secret powers of the Rooster talisman and must use magic and martial arts to stop the villainous Valmont and his thugs from stealing the powerful prize for their own purposes. When Jackie and Jade travel to Mexico to find the next talisman, Jackie ends up in the ring with world class wrestler El Toro Fuerte. He quickly discovers the Ox talisman but Valmont's goons are on his tail. Jackie and Jade team up with the mighty wrestler to battle the bad guys in a championship match of good vs. evil.

If you liked Jackie Chan Adventures, check these out...